I was very pleased to see that the Weekly Photo Challenge was “Companionable”, this morning.

For those of us who are old enough to remember the television show “The Six Million Dollar Man”…… I give you…. 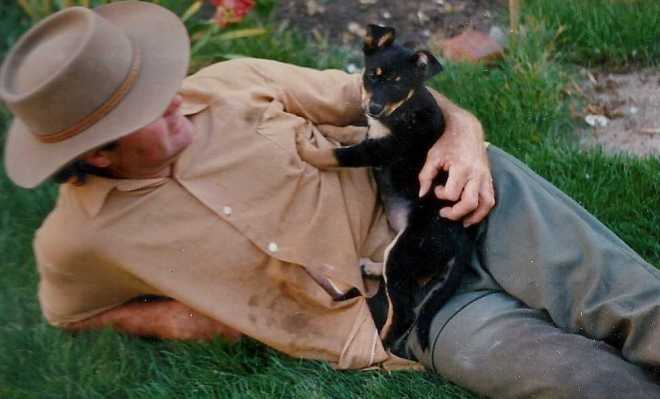 …my Six Million Dollar dog, or pup in this case. He had to earn his name. When I was offered a pup, from a litter of about ten. He ran up to me as I arrived and that was that. He was christened “Brandy” by my wife and from late 1988 until a sad Sunday morning in September 2001….where I went, Brandy went.

About 1996, Brandy suffered an eye infection which necessitated him being locked in the wool shed (the darkest place I could find) and to have his eye medicated at least twice a day. The greatest indignity was the bucket he had to wear so he could not scratch, or irritate, his eye during that time. This was to earn him the nickname, “Buckethead”. What else could it be?

About three weeks before Brandy passed onto a world without sheep to chase, he became a “dad” for the first time. At least the first time I was aware of. Once again in this tribe of six puppies there was one who would always ‘ferret’ her way through her litter mates to be next to my body when they were small enough to nurse all six on my knees.

She was christened “Ginger” and is still with us today. Her eye sight is not as good as it was, but she never fails to bound down the drive and twist herself inside out as she greets me upon arriving home from work.

Ginger’s life has been much easier than her father’s. She has not had the responsibility of working, but she has extended my memories of Brandy and created some of her own for me. Both father and daughter are both of a similar, small, build for their breed and they are/were both ‘my’ dogs. In my sixty plus years I have only had one other canine companion who ran a distant third to Brandy and Ginger.

After being a stressful baby, Number 2, and I often were out and about the farm together as he enjoyed (still does) socialising and ‘helping’ at a very young age.

Sadly, as with many children, he was kidnapped about 10 years ago, by the “Teens”. But if I can pre-book, about a week in advance, and remind him every day of that week, he will still help his dear old dad…….occasionally.

‘Mum’ suggested that they would be home by 9.30 and dad would come over to collect Jo. ‘Come for coffee’ I suggested. And so around nine we began to listen for Jo’s dad when suddenly there was a thump on the back door and a muffled yell above the television. Nothing like dragging the girl friend around the back, in the dark and thumping the back door to gain entry to the cave. Jo has got a lot of work in front of her if she sticks around.

Coffee produced some interesting information – at least I thought so. Jo’s dad works with wool. We both know my school mates from my Boarding School days and finally, he knows the husband of my first cousin. So there was a lot to talk about. I’m told that there were two pairs of young eyes glancing at each other and looking quite bored.

When queried about how the night went, the reply was ‘….. Good, good, …we didn’t pash or anything…’. At 1.00 AM his lordship was still awake – not to mention that his lordship’s father was not having a good night either. And it is all set for next Sunday night.

Oh Well! She’s nice. He’s nice. And taking a girl to church is certainly not usual. But, then again I have always said our son was a little on the weird side of normal!

Before our Number 1 son was born we were frequently told that “… it gets better after the first six weeks ….” It could only be the celibate who told me that and they must have had their heads must have had their placed firmly in the sand, or elsewhere.